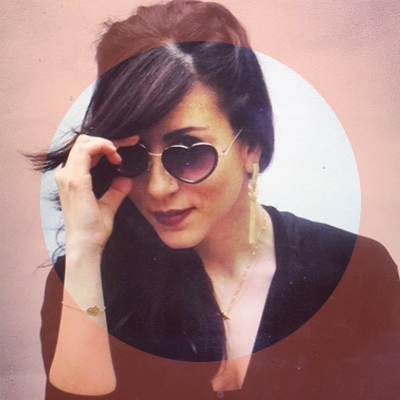 An Experience Design Lead at Holition, alumni Yasmeen Ayyashi shares the trajectory her career has taken since graduating from MA Narrative Environments, for this edition of ‘In Practice’.

Current role: Experience Design Lead at Holition, a cross-disciplinary creative innovation studio. Within my role, I hover somewhere between the UX, Strategy and Creative teams, and focus on designing both digital and spatial experiences. I work on projects outside of desk hours that are more in the realm of arts/culture.

– Tell us about a narrative environment you’ve worked on since graduating.

Given that I work in an agency type of environment, the projects I’ve been working on for the past couple of years have been mostly brand experiences. Every once in a while you get this one brand that is willing to entertain a more narrative driven experience. One that I was recently involved in was an experience for Moncler Genius.

The brief was quite complex as it entailed creating 3 different experiences in the same space for a pop-up, all of which could house a rotation of 27 different collections, each also with its own narrative.

The challenge was to come up with 3 main narratives that could function on their own, but also be able to hold that extra temporary layer of narrative without being compromised. The brand’s tagline, ‘one house, different voices’ meant that we needed to truly think of what polyphonic means, and how it could manifest into an experience. The brand’s concept was that different creative directors would interpret Moncler’s basic down jacket into a collection of their own, each of them naturally drawing in their own audience based on the story they would choose to tell through their collection.

Naturally, the 3 narrative spaces ended up being a breakdown of that, starting with a space that told the story of the materiality, moving onto an experience that showed the designer’s process, and ending with the world that each designer had built through their interpretation. The materiality experience was a proposal for a mechanical wall made out of the basic material used to make the jacket, which would morph and shape itself to mirror the silhouette of the person standing in front of it, reflecting the essence of the brand, and how focused it is on its audience.

The second experience, being the Design Process room, saw a sculptural piece of fabric suspended in the space, with a projection mapping of behind-the-scenes footage of the creation of each collection. The third and final space was covered in screens on all surfaces, and involved a mechanism where, as soon as a visitor picked up a garment, they would trigger visuals from that collection’s world, immersing themselves, and anyone around them in it. The pop up ran in Milan, Tokyo and Paris simultaneously. When we went into production, some constraints meant that the first room’s implementation had to be altered, but the narrative still worked.

– What’s the most unexpected collaboration you have been involved in?

It’s a project that came up through a lunch-time conversation with a friend of mine who’s a software engineer. We’re working on creating an experience that utilises machine learning to interpret and encrypt human emotion (in the form of voice input) into a spatial soundscape that draws from the context of the place that it’s exhibited in. I’ve never worked with someone who’s that structured and whose background is so vastly different from mine. It’s a great opportunity to learn, and to challenge my own knowledge by teaching someone else bits of our methodology. It’s still a work in progress and will likely take some time as it’s on pause right now, but we’re really excited to see how this is going to develop both technically and conceptually.

– Is there a current narrative environment you would recommend people to visit?

I prefer experiencing (and creating) things in physical space, but over the past few months, with lockdown, I’ve found myself immersed in the digital. I find a lot of inspiration in game worlds, and how varied the means by which the stories are communicated within them are. Examples that come to mind are Inside by Playdead or Hollow Knight by Team Cherry, in which the environment does a major part of the ‘telling’ and teaching of the game, and the actantiality of elements in that world is evident throughout the game.

Also, anyone reading this who owns a PS4 is probably already familiar with ‘Dreams’, a game creation system developed by Media Molecule. I think it’s worth mentioning because it’s provided people with the tools to enable them to create their own digital spaces, narratives, characters and even soundtracks.

The worlds created by users on the platform are as varied as their imaginations, and are shareable and playable by anyone. So you’ve got your ‘visitors’, your narrative that is deliberately told through the space (of course, the level of intentionality and narrativity varies within those environments, so that’s taken into account), and there’s also room for collaborative work. It’s a potential archive of virtual narrative environments.

– What narrative environment method or approach have you found useful in your practice?

I’ve personally found the process of creating a story matrix to be really helpful. It helps you get granular with the planning of the experience, and to really scrutinise the details, which is what makes it such a powerful thinking/planning tool. It’s also a great tool for communicating your concept, both internally to your team, and externally to a client or partner. It always helps sell the story.

– What advice would you give a current student about to graduate?

1- Be multidisciplinary, but define what you do. One thing I struggled with when I first finished MANE was that companies didn’t know where to place me because I was selling myself as a multidisciplinary designer. Most people don’t know what to do with that. Define what you’re good at, or what you want to be doing, and demonstrate the range of skills/disciplines that you’re able to work with. Alternatively, and this is a little more difficult, find a multidisciplinary company that is comfortable with the ambiguity, as long as you’re also okay with that.

2- If the role you want doesn’t exist, create it. The good thing about being part of a discipline that’s so vague-sounding is that it can be so broad. You may have to get in through a role that you don’t like, but then you show them how we do what we do, and it starts to become a much clearer, more concrete path. The advantage that we have is that we can function as part of any team of makers/thinkers/planners.

3- Be mindful of your career choices. Make decisions intentionally, and only go for work that is aligned with what you want to do. If you have to compromise, set a time limit for how long you’re willing to stay in that position before moving on. And stick to it.

4- Don’t be afraid to talk about what you’re making. The more you share what you’ve done and what you’re interested in, the more likely you are to attract the right kind of collaborators, and possibly future clients.