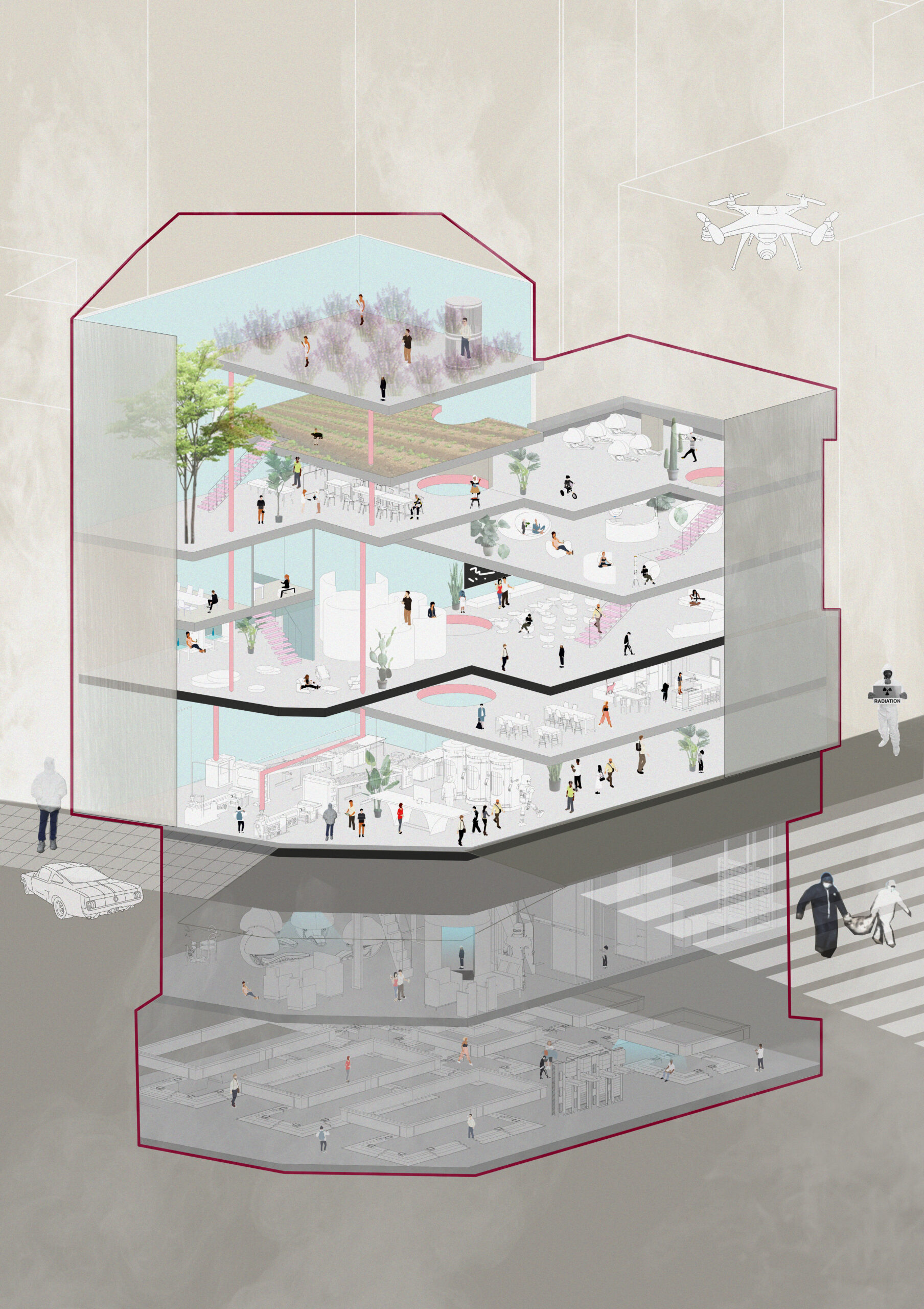 How can the future healthcare system tackle issues such as pollution, mental health and stress, from a centralised and reactive viewpoint?

In collaboration with ARUP,  first year MA Narrative Environments students used research and foresight techniques to imagine a healthcare system in 2040 functioning in a monitored co-living and working facility such as their proposed prototype “Flora”, forecasting the following possibilities and influences.

Since 2030, brain chip implants have become more prevalent in society. It has been a decade since patients suffering from Alzheimer’s and Dementia have been implanted with chips and results have so far been successful. much younger people with mental health issues are being prescribed chips from their online GP’s as a recommendation for recovering and deleting memories. These brain implant chips are being provided for free on the NHS for degenerative diseases and in the last 5 years have been trialling them for younger people diagnosed with mental health issues. The optimum environment to test the chips are within monitored co-living and working facilities such as Flora. Through this new system, the NHS can monitor resident’s responses through health data as well as short term memories.

As a result of expensive healthcare and living costs, the black market is an outlet created by grassroots movements to provide more accessible necessities for the underprivileged population. It’s presence is known by the government however
is left undisrupted by authorities as they want to allow people to have some freedom of movement and feeling of liberty to prevent rebellion.

Many younger generations have been suffering with mental health issues, less job availabilities have led to a feeling of lack of purpose. To aid the development of individual’s digital and business skills, workshops are hosted by Flora to provide residents with reassurance that they can tackle this fast-paced evolution of the working world. Residents are hand-held whilst staying at Flora, ensuring they have an optimal experience and leave feeling pro-active and extremely motivated.

Flora therapists achieve positive results by locating happier memories and placing them at the front of the brain whilst slowly depopulating and deleting the more depressing memories and traumas. Residents are aware of this memory tampering and sign consent forms at initial arrival at Flora, however they are unaware of how the system is potentially corrupted through third party involvement.

Meals cooked and served by your robot friend! Every 5 residents share a robot butler who prepares their favourite meals according to health restrictive guidelines set by Flora. It is a way to meet other residents who also share your robot and you may want to enjoy dining together after a hard days work.

It is the year 2040 and instead of cutting back on our frivolous usage of fossil fuels, we overshot 2019’s budgeted remaining carbon budget of 580 billion metric tonnes in just 15 years. The result has been horrifying, the earth’s climate has increased by 0.5 degrees in this time, having deadly affects. Plant life and animals are seriously under threat and our green planet is slowly becoming arid. Life in cities, especially London where this story is set has become unbearably hot. Land in central London is still as desirable and pricey causing all the

public and green spaces to be demolished, along with social housing.

As farming is a primary activity at Flora, the harvest reaped from the fields are herbs and flowers such as lavender which produce extracts used to produce essential ingredients for the nootropic pills that enhance cognitive performance. The pills produced by Flora are cognitive en- hancers and increase dopamine levels to improve work efficiency. This idea is based on existing brain enhancing nootropics which are embedded into our daily consumptions, such as caffeine.

Co-working is one of the foundations that make up Flora. Based on its predecessor Fora, a purely coworking functional space, Flora builds on this idea and now includes treatment for the stresses that accompany working. Even though transforming slightly from its original co-working purpose, the core of Flora remains to revolve around improving efficiency and work motivation through co-working.

Sleeping in Flora is unlike any experience outside of its walls. It is a shared experience with other residents where you are physically and mentally connected. It is a way for the Flora therapists to monitor hormone levels and brain functions during the night and possibly exchange memories between residents.