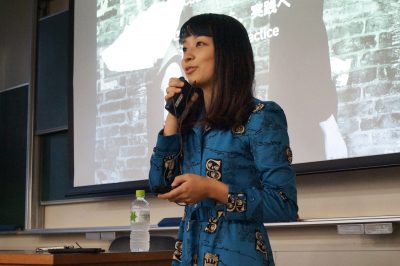 Second year student Sachiko Osawa was invited to give a guest lecture at International Christian University, Tokyo Japan, where she graduated from in 2010. She was invited to speak for the students on the Cultural Studies course about Narrative Environments at CSM, and her current major project “Yami-ichi” – a non-monetary art auction.

Sachiko was discussing her experience of Narrative Environments. She used the opportunity of having an audience to create an interactive experience and test out ideas in relation to her major project. Sachiko invited an artist, whom is participating in her project, and held an actual auction with 120 students – and by the end of the lecture, a non-monetary auction was actually made.