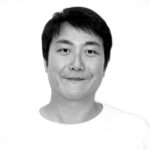 Phark (Read as Park ) is a professional interior architect based in Bangkok. He had been working in both interior and architectural firm for ten years since graduated the Bachelor Degree in Interior Architecture from Chulalongkorn University, Bangkok. He had done various types of projects from the very beginning to the completed construction which include residential, commercial, hotel and resort.

Born and raised in Bangkok, he had been struggling through the limitation of the city space which drew its people apart. He is determined to find the approach to utilize these limited space conditions, sharing the space which will not only stimulate interaction between the user-to-space but also user-to-user as well.
He tried to experiment the conceptual boundaries by dividing the space with the users’ activities and movements rather than physical elements. Which he believed that this ‘obscured
boundary’ could change the user’s perception of privacy, merge their personal spaces with the others and allow them to truly connect and share experience within the confined space of Bangkok.

He is still in search for every possible answer through all the practices and experiences.
In hoping that one day he could reclaim Bangkok’s true happiness after its original name Krung Thep or ‘ The Great City of Angels ’.