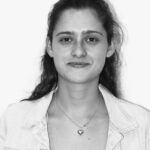 Marina Eisenhauer is a London based set designer and architect.
She completed her BA in Architecture and Urban Studies at the University of São Paulo in Brazil. Her final thesis focused on the relations between theater and the city, and the goal was
to understand the possibilities that the urban environment provides as scenography and space for performance and, on the other hand, how art can act as a tool to change the uses in the
city spaces.
After graduating, Marina started working as an assistant production designer for film and television. She had the chance to collaborate in several advertising and feature films. During
this period she has worked with the main production companies in Brazil like O2 Filmes and Saigon, and also some international names like Iconoclast and Stink Films.
After two years working in the film industry, Marina decided to expand her career path by taking a MA course. Searching to work more focused in social matters as well as exploring
different approaches of spatial and set design, the MA Narrative Environments at Central Saint Martins was the perfect choice for her.