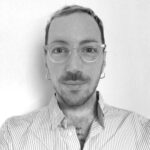 Simon Banos is the Placement & Mentor broker at the MA Narrative Environments.

He comes from Athens, Greece and defines himself as a ‘curarchitect’; a curator with a special care for space. Simon holds a diploma in Architecture (National Technical University of Athens) and an MA in Narrative Environments (Central Saint Martins, University of the Arts London), awarded with the Vice Chancellor Scholarship and the MANE Bursary.

His multidisciplinary background shaped an understanding of the space as a vessel of meaning and agency. As a creative individual Simon derived a lot in different design fields including the fashion industry where he worked as a set designer for the New York Fashion Week 2016 at Bureau Betak. He currently works at Simon Leach Design as an exhibition designer, collaborating with museums and institutions such as V&A Museum of Childhood, The British Library, Old Royal Naval College and The Museum of Oxford.

His involvement in the arts world also found him curating the exhibition “DeCorbuziers” (2015) -a neon-pop memorial for Le Corbusier- at Romantso, Athens, with the support of NTUA and Fondation Le Corbusier. Simon’s practice as a new-media and performance artist engages with topics such as the impact of social media and the digitalisation off our sensory experience.