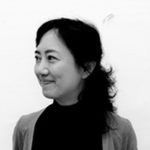 Ingrid is a scenographer, cross-disciplinary designer and maker based in London.

She applies scenography on an urban scale, and designs performances that respond and investigate contemporary perspectives.

She has designed for theatre, dance and sound performances, as well as exhibitions and installations in the public realm. She received an MA in Scenography from Central Saint Martins in 2002, and worked at Heatherwick Studio for 7 years, where she was involved in a wide range of projects with clients such as the British Council, the Foreign and Commonwealth Office and the V&A Museum.

She was one of the core members in the studio who delivered the Lubetkin-winning UK Pavilion for the 2010 World Expo. Her design for the exhibition of the instruments used in Longplayer, a 1000-year musical composition, was selected for the 2014 Aesthetica Art Prize. As scenography consultant and designer, she contributed to the Fire! Fire! Exhibition at the Museum of London.

She is a member of the Society of British Theatre Designers.