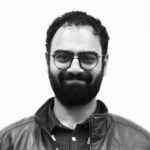 Tarit is an Architect from India, with a versatile portfolio including projects in the UK, continental Europe, and India. These range from residential design to Institutional Master plans, and collaborative projects for sound and light shows at India’s leading heritage monuments like the Taj Mahal and Red Fort. During the M.A. Narrative Environments programme, his projects have included collaborating with The British Museum, The City of Sarajevo, Arup and the European Space agency, where he worked on designing a pavilion for a futuristic Martian Habitat. His time working with the European Space Agency inspired him to combine his long term fascination for space exploration and science fiction with his practice as an architect. He is interested in working on the design of human habitats in outer space, in a way which goes beyond the current emphasis on technology and finance, and one that gives primacy to the human condition - a process that involves paying equal attention to the arts and humanities, social and ethical considerations, and human psychology and behaviour. As a practitioner, Tarit sees himself positioned uniquely at the intersection of the worlds of design and science. He is looking forward to a career in space architecture and in designing experiences which bring complex scientific, social and political issues to non-specialist audiences. He strongly believes in the importance of looking ‘up there’ to better understand our problems ‘down here’. In his spare time Tarit plays the guitar, and is an avid sports fan.