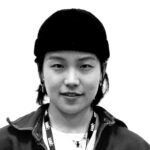 BA architecture made a breakthrough in Ming’s vision toward the field of space design. With the rigorous and comprehensive study on architecture and urban design, Ming has developed solid basic skills in graphic design, space cognition, freehand sketching and handmade models. During the BA, Ming tended to explore more potential of dramatic space in multidisciplinary arears like performance design and photography. Ming was the elected participant in the Bauhaus Stage in November 2017 and did be given the chance to design for the stage and performance design. The results of this Bauhaus Stage was exhibited in April 2018 at the opening ceremony of CDM, and will performe for the public in Berlin during the Bauhaus centennial anniversary in 2019. Ming have full interest in photography and did worked for Shanghai Fashion Week as fashion photographer in 2017. The theme of the most of Ming’s projects like some installations is about to discuss the the the relationship between the space and the human body, while introducing the major themes that have concerned her :body as space and space as object. The essence of the space design is the development out of the material itself and the material- formed persons. Currently, Ming's direction is to be a exhibit designer and photographer in UK to have more opportunity to copperate with more artist.