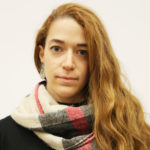 Era Pouliou comes from Greece and is an eager explorer of the every-day, who happens to be an architect as well. She was born in Athens and has studied Architecture in the Polytechnic School of Aristotle University of Thessaloniki from where she graduated with an honorary Diploma. During her studies, she was deeply interested in examining the mundane aspects of architecture and re-inventing them as imaginative and alternative narratives. After graduating, she moved to Berlin where she completed her internship as a junior architect in Sigurd Larsen Architecture and Design and cultivated critical thinking about social and spatial problems, producing both real and fictional concepts. Alongside her studies and professional life, she explored photography and graphic design as creative tools in self- motivated projects and equipped herself with excellent craft skills by experimenting with different materials and methods. She strongly believes that "to be rich in the cradle of our imagination is to be full of stories" and by doing the MA in Narrative Environments at Central Saint Martins she aspires to grow as a visual and spatial storyteller, in order to shape the future of immersive educational experiences, society, people’s mentality and aesthetics.