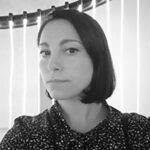 Cristina Salvi is a second year tutor and placement adviser. Cristina Salvi is a museums, exhibition and interior freelance designer with over ten years’ experience in three different countries: Italy, Spain and the UK. She received a BA Interior Architecture and an MA in Museography and Exhibition Design from Polytechnic University of Milan. She started her career working on the Renzo Piano Building Workshop’s exhibition at the Triennale di Milano followed by the Spanish Pavilion project for the 2010 Shanghai World Expo in collaboration with EMBT in Barcelona. In London, she worked for Metaphor, Casson Mann and Ralph Appelbaum Associates on several temporary and permanent exhibitions and visitor experiences across the world including the Olympic Museum (Lausanne), the Cite’ du Vin (Bordeaux), the Frost Museum of Science (Miami), the Imperial War Museum’s WWI Galleries and the Natural History Museum’s Hintze Hall (London). Recently, she designed Christie’s shows for the auction house 250th anniversary and she was also D&AD judge for the Spatial and Experiential Design Awards. She is currently a lead designer for RAA on an international project of a new museums district in Dubai.