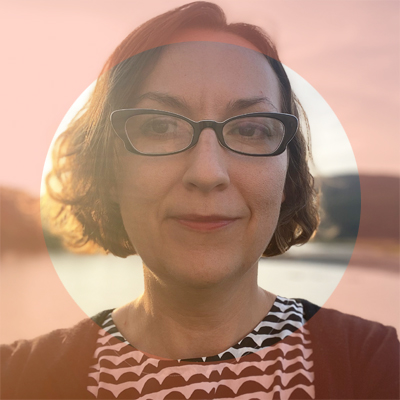 For this edition of ‘In Practice’, our blog series exploring the trajectories of MA Narrative Environments graduates, we are delighted to catch up with alumni Lucy Carruthers, a Senior Designer at MET Studio.

–What is your current role?

I am currently working at MET Studio as a Senior Designer, creating visitor experiences.

I have been telling stories in spaces for museums, exhibitions, visitor attractions and the public realm for over 18 years now.

I am also passionate about communicating the climate crisis, as a co-director of Climate Museum UK and continue to evolve ‘Floodproof’, which began its life as my MANE final project.

During lockdown I have been reflecting on the ecological crisis and created Animal Archives: Re-wilding the Museum which was commissioned by Scarborough Museums Trust, for which I created the following animation:

– Tell us about a narrative environment you’ve worked on since graduating.

Whilst working at Event, I developed heritage sites and museums with vast object collections and archives. From Leonardo Da Vinci’s Codex or the Ringelblum archive testimonies which informed the Holocaust Gallery in POLIN. From industrial cranes and vehicles at M Shed in Bristol, to buildings relocated from around Wales to St. Fagans National Museum of History which won the Artfund Museum of the year award 2019. Many of these histories resonate with a powerful sense of place and purpose.

The Museum of Water took a different approach as it started life without any objects and with no permanent home. A touring installation with an invitation for visitors to bring water that is precious to them and share its story. In 2013 I met the artist Amy Sharrocks who conceived the idea and was building the collection of publicly donated water. Amy invited me to design a temporary Museum of Water for the Lift festival in collaboration with Artsadmin and in partnership with Imagine 2020.

The Deadhouse at Somerset House was the perfect environment already seeping with the substance. Water pipes running overhead, buckets collecting drips and dampness running through the brickwork. The experience of walking around the site was key to imagine how the visitor experience should unfold in the subterranean setting below the water fountains.

Entering from the Thames Embankment to the sounds of water and using light to evoke reflections. The experience began with a visual statement – a wall of dripping water – so visitors knew they had arrived. The rows of doors shielding small alcoves became the prologue to the museum. Some already had surprisingly relevant objects, a cascade of radiators balancing and waiting to join the vessels for water storage. The first alcove represented the Thames itself. Before the opening, a team of volunteers collected water from the river passing buckets along the pavement to the entrance and spilling drops along the way. I documented this live performance as a film I coined The Thames Transfer.

As visitors entered the Deadhouse, water custodians in monogrammed aprons guided you through three scenes.

1/ Inspiration: an atmospheric introduction to water containers, including a freezer with an ice core from Antarctica – which temporarily got switched off – reminding us of the fragility of our planet.

2/ Collection: a display of water bottles already donated with personal handwritten titles to distinguish the source and resonance of the liquids.

3/ Archive: the processing department where custodians would receive the water and stories. This was alongside other playful opportunities to contribute and listen to stories including an interactive sink created by 59 Productions.

Back at the Courtyard visitors were offered a glass of water at the water bar – reinforcing the role water plays in our performance of everyday life.

– What’s the most unexpected collaboration you have been involved in?

My professional projects involve working with fascinating curators and specialist consultants on an array of subjects, from Roman Britain to future sustainable cities. Projects often extend over years, as we work through different stages of funding. This timeframe provides an opportunity to build strong client relationships and get to know our collaborators.

In contrast, Art School Lab that I joined in 2012 took place over just two weeks, as a group residency at the Barbican and the Bauhaus in Dessau. There, I collaborated with artists, writers, dancers, filmmakers, and activists. Through unlearning workshops and creative activities, we considered the social role of the artist. It was an unexpected experience to experiment with two iconic institutions as our playground. A space to be authentic and trust our instinct: to write, make, perform and document. It was an opportunity to be curious and empathetic through open dialogues amongst inspiring people. At our closing event, I performed, acted as a compère on roller skates and continued my photographic documentation. My performance was about the foresight of the Barbican architects anticipating future tides lapping below its concrete edges and high walkways. Ultimately the experience was about having authorship and agency, providing a platform to create a manifesto. To transcend inspiration, build change, create a positive legacy… and remember to dance.

– Is there a current narrative environment you would recommend people to visit?

Whichever country you visit, seek out the local museums to discover the personal stories and perspectives. If you are in Denmark, I recommend a visit to Strandingsmuseum St. George, a project I designed which is situated in a fishing village on the West Coast of Jutland. The sea is the curator of the collection, as the museum tells the stories from objects salvaged or washed up from wrecked ships. The main focus is the story of HMS St. George wrecked in 1811 and rediscovered by divers. A tower was added to the existing building providing beautiful coastal views and a bespoke vertical showcase for the ship’s rudder, the tallest case I’ve walked through. The sea itself is brought into the first gallery with a 3-storey projection showing the dramatic changes above and below the water level. We transformed the narrative of the ship into immersive set works, graphics, AV and sculptural installations. Working in close collaboration with Eithne Owens, graphic designer Pamela Parker and the client to create a unique new experience. The museum team built a lot of the displays, alongside a theatre designer, and the illustrations of Toril Bækmark visually unified the experience. The history of the community is a thread that runs throughout with the local population responding to emergencies on their shore. Last year the museum was recognised for its collaboration by receiving the Silletto prize at the European Museum of the Year awards.

Since studying on my BA Interior Design I have always been motivated by telling stories of place. Creating anthologies of a building or site and researching the different uses or events that occurred there. Crafting a bespoke narrative that connects the facts but then extrapolating that vision to imagine the future. How the role of a building can transform and change its use in response to its context.

As a student, I was able to explore London’s rich history by creating hypothetical concepts. This context proved useful when at Event I was tasked with representing London’s story in an iconic building – The Shard. My brief was to engage visitors on their way to the View. I adopted the methodology of composing a score to map this unusual vertical journey. Using the analogy of a composition to create a variety of moods, atmospheres, light and rhythm. I considered the sequence of the spaces, how they function physically as a multi-sensory experience emphasised the role of sound as a device to sculpt the visit.

We worked with a composer David Mitcham to define a soundtrack to accompany visitors through the building, performed by the LSO and recorded at Abbey Road Studios. We also worked with local filmmakers to depict the growth of the city and the diversity of its communities. Fascinating facts animate the skyline and lift ceilings are brought to life. An interlude on level 33, as whispering voices surround an immersive map of cryptic sentences. On level 68 a typology of clouds builds anticipation for a dramatic sky or an expansive view.

Aim to gain varied experiences working in different collaborations to understand which kinds of environments connect with you. Don’t be afraid to reach out and ask people or contact companies you are inspired by. I recommend looking locally for public consultations or volunteering opportunities to broaden your insights and test ideas. Participating in the Pocket Places project in Peckham, enabled me to gain a greater connection with my local community, to see co-design from a different perspective and create a positive experience for my neighbours.

Consider the relationship you build with the course and your fellow students, as you may work together in the future. I have worked with several Narrative Environment alumni, in particular, Sophie Smith, Claire Healy and Pamela Parker.

Remember your creative and collaborative skills are transferable across the disciplines and being agile will broaden your perspective. Consider your ethical code and stay authentic. Trust your instinct and try to pursue your passion projects ideally as your career or at least in parallel.